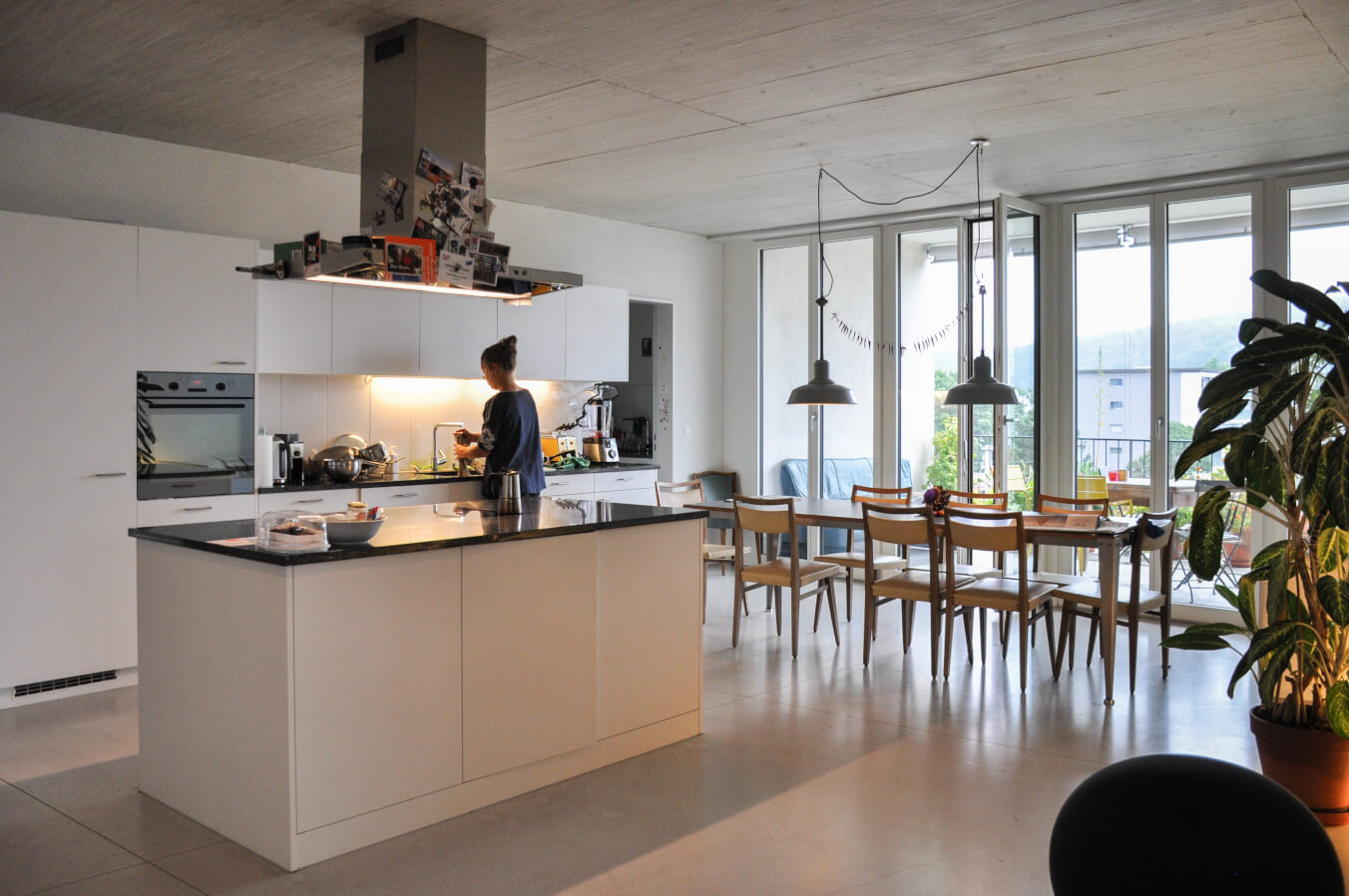 Many urban agglomerations have experienced strong population growth in recent years, leading to a shortage of living space and creating high economic pressure on inner-city real estate. Living space is becoming precious and expensive. At the same time, the number of one-person households is increasing, especially in the growing over-50 age group. The consequences of this individualisation trend in society are isolation and loneliness with rising housing costs and resource consumption. Are there forms of housing that meet both the need for community and the need for protected privacy? How can we live well and cheaply in less space than before?

Cluster apartments are a new form of housing in which several private living units are combined with communally used spaces. The private housing units consist of one or more rooms, have their own bathroom and are optionally equipped with a (tea) kitchen. The communally used rooms include living, cooking and dining areas and optionally further sanitary and utility rooms or flexibly usable guest rooms, so-called joker rooms. The overlapping of usable and circulation areas usually results in spacious, communally used areas, which increases the quality of living and has a space-saving and cost-saving effect.

Cluster living is characterised by self-organised processes and a high degree of influence on the development, planning, management and maintenance of the premises. Residents of a cluster apartment associate this form of housing with self-organised living together and the collective use of common areas consciously and permanently. Cluster living thus differs from other forms of living together, such as in student, old people’s or nursing homes, which are primarily purpose-oriented and often temporary, and are structured and regulated by sponsoring organisations (Prytula et al. 2020 b, pp. 8-9). The size of the cluster dwelling is determined by the number of people living together in it and their living arrangements. The typical group size in cluster apartments is between seven and nine people, but more than 20 residents can also live together (ibid. p. 48f.). Cluster apartments enable the realisation of exceptionally deep building structures, which allow for higher energy and cost efficiency. Buildings with cluster flats are therefore particularly suitable for redensification and utilisation of so-called difficult sites, as well as corner situations in urban multi-storey housing (ibid. p. 48/ 54).

The pioneers in the development of cluster apartments were mainly Swiss housing cooperatives. In particular, the Zurich construction and housing cooperative Kraftwerk 1 played a major role in shaping and developing the typology of cluster apartments with the Hardturm (1999-2001), Heizenholz (2008-2012) and Zwicky Süd (2009-2016) projects (Bau- und Wohngenossenschaft Kraftwerk1, n.d.; Prytula et al. 2020 b, p. 34). Based on the experience with large residential communities in the Hardturm project, Kraftwerk1 built the first two cluster apartments in the Heizenholz project. The flats are each rented to an association. The eight to ten members organise their living together, the furnishing, the distribution of rent and cooperative shares themselves (Thiesen 2014, p. 76). New members are also selected by the community, so no changes to the tenancy agreement with the cooperative are necessary in the event of a change. Within the flats, solidarity-based financing models are used to broaden the spectrum of residents and, above all, to appeal to older people. However, the majority of the cluster flats in Heizenholz are occupied by professionals aged between 35 and 55 (ibid.).

The Berlin cooperative project Spreefeld was initiated in 2007 and completed in 2014. The ensemble consists of three free-standing buildings on the banks of the Spree River and is considered a pioneer for a large-scale community project that combines new forms of housing, shared spaces and office space. The project includes two large cluster apartments with a living space of approx. 900 m² and approx. 600 m². The larger of the two cluster apartments, the “Spree-WG”, is home to 21 people. It is organised as a maisonette over two floors with a functional separation of the communal areas into a kitchen below and a living room above, to which a shared bathroom with a view of the Spree is connected. Large communal balconies on both floors complement the living space. The private units consist of one to three rooms with private kitchens, whereby individual private units do not have their own bathroom. The design was largely determined by the residents. Within the given floors, they could decide on the size and layout of the private units themselves. The communally used rooms were planned collectively (Prytula et al. 2020 b, p. 16 ff.).

Cluster housing enables high quality living in dense urban areas that meet the many requirements of sustainable urban development, such as social mix, participation, affordability and the economical use of land and natural resources. In doing so, they address five major current social trends in the housing industry and urban development:

The special qualities of cluster apartments cannot be adequately represented with conventional evaluation instruments for space efficiency. For the same or less land consumption per resident, a considerably greater range of uses and “spatial luxury” is offered.

Key factors for the success of cluster apartments are appropriable and adaptable spatial and social structures. This requires structural features such as sufficiently large, cleverly zoned communal living spaces that allow for parallel uses, as well as a great variety in size and floor plan organisation in the individual rooms to provide space for changing living needs. Adaptability is realised through conversion rather than remodelling. Especially within larger projects, this is supported by so-called flex spaces or by relocation options.

The individual willingness to live together as well as a successful composition of the residential group are also decisive parameters for long-term functioning and low-conflict residential communities (Prytula et al. 2019). The central contribution of cluster housing to resilient urban development is that it provides functioning examples of a diversification of housing options and a changed housing culture.