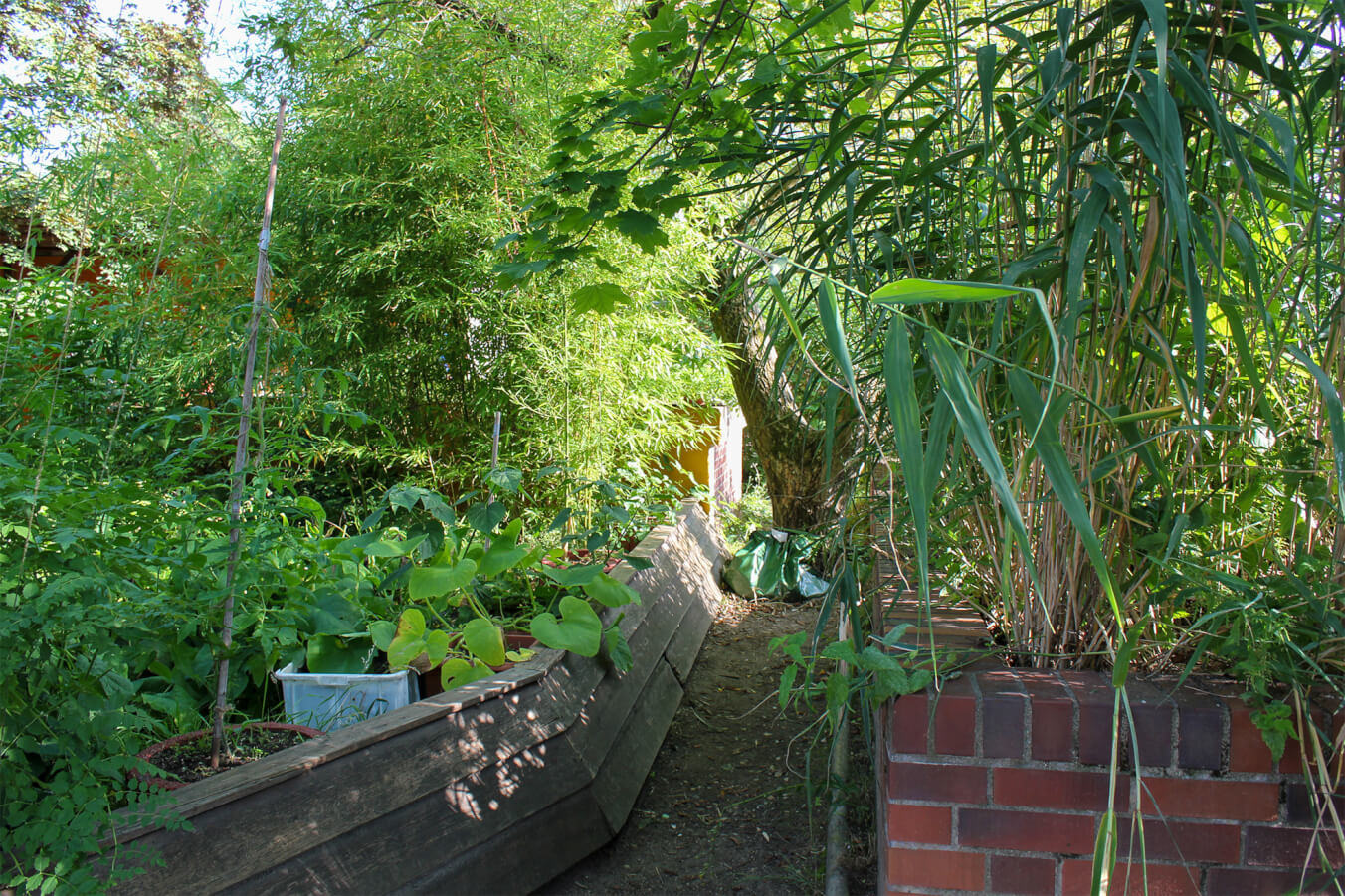 Water has been a central condition of existence for all cultures since time immemorial, which is often expressed in historical architecture and engineering structures. Climate change is causing an altered water regime in Central European climates with increasing periods of drought and heavy rainfall. Therefore, it is important today and in the future to use valuable drinking water in a targeted manner and to collect, store and use rainwater as an additional water source. Rainwater can be used as service water, for irrigation or for evaporation via retention in green and blue infrastructures. This improves the microclimate and at the same time relieves the urban sewerage system (Jaulhac 2008, iii). What strategies and measures can be used for rainwater harvesting?

In addition to pure storage in retention areas such as green roofs or surfaces and basins or ponds, rainwater storage can also be used to irrigate green spaces and as service water for flushing toilets, washing laundry or hydroponics. There are different systems for rainwater harvesting: the rain barrel and the rainwater harvesting system in the form of a storage tank with a pump that delivers the water to the tapping points. The storage tank can be installed indoors or outdoors, for example under greened outdoor areas.

The rainwater retained for use in buildings must be hygienic and harmless to health, must not contain any solids such as sand and must be chemically harmless to the system components. The quality of the water is largely determined by the properties of the water and the catchment area as well as by the technology of the rainwater system. Rainwater should not be treated with chemicals. The distribution network for rainwater use must be designed separately from drinking water use; without connection between the pipe networks. Rainwater can also be used for fire-fighting water supply in the form of fire-fighting water cisterns or ponds. Rainwater harvesting systems initially incur investment costs with a payback period of usually more than ten years (UBA 2020). However, there are also more cost-effective solutions with low costs for maintenance and cleaning, as described in the following example (BIMOKA n.Y.).

The ufa factory uses rainwater from roofs, from green roofs and runoff from property-owned streets for toilet flushing and irrigation of all green roofs and facades on the site. This rainwater harvesting system is connected to the conventional rainwater sewer system (BIMOKA  n.y.).

In 1985, green areas were initially laid out. Nine years later, a rainwater harvesting system was integrated (Internationales Kultur Centrum ufaFabrik e.V. n.y.). The collected water is stored centrally in a former underground waterworks station. This station, with a capacity of 240 m³, is composed of the main tank with 220 m³, a 20 m³ service water tank and a settling basin with 20 m³. In the settling basin, the rinse water from the café is also fed in. Since the rainwater from the first flush is heavily polluted, it is filtered through a modified constructed wetland on an area of 25 m² before being made available for irrigation and toilet flushing (Jaulhac 2008, 49).

In the sedimentation tank, stones, sand, mud and objects such as leaves, paper and wood are filtered. The water then flows through gravel on a separating grid into the second basin. This roughly cleaned water is pumped into a filtering constructed wetland. The soil filter is capable of filtering 400 litres per square metre per day (BIMOKA n.y). All remaining particles are filtered through bulking shale in the substrate filters. In addition, soil organisms from the roots of water lilies, rushes and reeds convert further impurities into minerals. The plants use these minerals as fertiliser. The water – now almost drinking water quality – is distributed from the cistern under the wetland to the buildings via a booster system. The ufa factory needs 3000 m³ of water per year for both uses. Due to the catchment area of 7600 m² and the average amount of precipitation, the estimated demand of around 4000 m³ could be completely covered by rainwater (Internationales Kultur Centrum ufaFabrik e.V. n.y.). However, due to losses and pollution, only 72% of rainwater is available from precipitation and 28% is supplied by the public drinking water network (Jaulhac 2008, 49). Thus, a high proportion of drinking water can be displaced by the use of rainwater. This rainwater system was used for the preliminary study of rainwater management at Potsdamer Platz (BIMOKA n.y.).

In the IBeB project, most of the roof of the entire building is covered with gravel and is used for rainwater infiltration. The water thus obtained is stored and used to water the plants throughout the house. Excess rainwater is gradually fed into the sewage system. Primarily robust plants are planted, which are normally native to deserts and steppes and can withstand the adverse weather conditions on the roof.

Rainwater harvesting is an essential component of ecologically planned projects by using it for irrigation, food production or sanitation instead of discharging the water directly into the sewage system. Furthermore, in addition to saving drinking water, rainwater can be stored for dry periods. In conventional buildings, almost half of the water consumed daily is used for flushing toilets, washing laundry and watering the garden. For these functions, the use of rainwater offers great savings potential, as drinking water quality is not required for this. Rainwater itself is mostly free of pollutants and is particularly suitable for irrigation purposes. Pollutants are only absorbed in relevant quantities when the water comes into contact with the roof, façade or street surfaces and the deposits adhering to them. The Roof Water-Farm research project considers smooth surfaces such as glass or burnt tiles to be suitable. Negative impacts on water quality are caused by metal surfaces such as copper and tin, materials such as bitumen, root-retardant films or some biocide-containing wall paints (Million et al. 2018 a, p. 15). To retain leaves and the like, a screen in combination with floating abstraction from the cistern is usually sufficient. Rainwater is also very soft, so that the evaporated rainwater leaves hardly any residue and thus minimises the maintenance effort, which has a cost-reducing effect on greenhouse operation. It is also very suitable for fish farming (aquaponics) and plant cultivation (hydroponics). In rainwater harvesting, especially with regard to food production, the choice of catchment area and its surface area is of particular importance (ISR n.y.). Rainwater harvesting for intensive crops in greenhouses requires, in addition to the greenhouse roof, further catchment areas (in contrast to greywater recycling) and comparatively large storage facilities to cover the water demand in dry periods of several weeks. A suitable treatment plant must be available for the use of precipitation water from low-polluted traffic areas. (Million et al. 2018 a, p. 14).