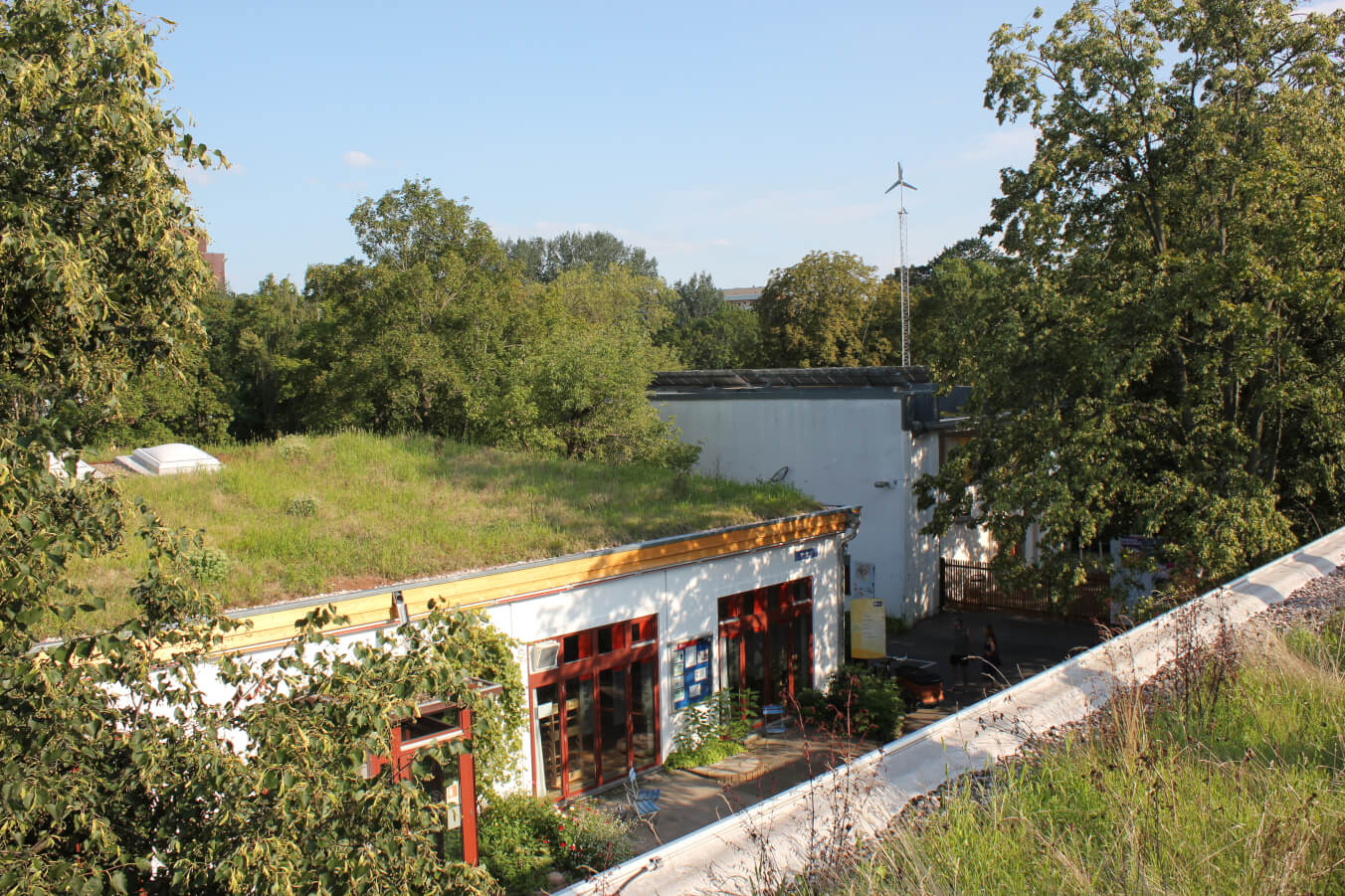 Our cities today are mostly heavily sealed. The consequences of this are overheating in summer and a lack of retention areas to absorb rainwater. In addition, cities are burdened by high levels of air pollution from particulate matter and nitrogen oxides. How can green roofs counteract these developments and contribute to resilient cities?

Green roofs serve as compensation for sealed surfaces and for water retention. This creates better microclimatic conditions, prevents overloading of the sewer systems and air pollution can be absorbed by the vegetation. The cooling effect of green roofs is due to the high proportion of evaporation, which can reduce the surface temperature, the heating of the ambient air and the heat input into the building. The intensity of the cooling effect depends on the soil moisture – this can be lost during longer periods of heat without additional irrigation. The energy balance of green buildings thus varies depending on the roof type due to parameters such as evaporation, reflection and heat dissipation into the air (Schmidt & Roswag-Klinge 2020: 12).

In contrast to conventional roofs, green roofs can heat up only up to 30 °C. Their annual temperature fluctuation is also only about 30 °C, while this is estimated to be up to 100 °C for conventional roof materials. Green roofs can therefore extend the life of the roof covering. Typically, the structure consists of the following layers (from inside to outside): root-proof roof sealing, protective layer (protective and storage fleece), drainage and water storage layer or element, filter layer, vegetation carrier (substrate) and vegetation layer (Magistrat Linz 2020, p. 4).

Depending on the substrate and vegetation height, a distinction is made between extensive and intensive green roofs. Extensive green roofs are largely self-sustaining and self-developing, near-natural green roofs. This form of greening can be realised on flat and sloping roofs. Prerequisites for a green roof are a static check, as the roof construction must be designed for the additional weight per unit area, a completely sealed roof (protection from roots) and an examination of the site conditions such as the compass direction and shading situation. For planting, frost- and drought-resistant, low-growing plants such as bulbous plants, ground covers (e.g. sedum species), mosses, grasses and herbs are suitable (Magistrat Linz 2020, p. 4). The total height of the extensive greening is between 6 and 15 cm and the weight per unit area is about 0.5 to 1.5 kN/m². Walking on the roof is only possible for service purposes. In addition, extensive green roofs usually do not require additional irrigation and can usually be established and maintained with little effort (Phoser et al. 2013, pp. 55-57).

Intensive green roofs have a thicker layer structure of 15 to 100 cm with a higher evaporation and water retention capacity than extensive green roofs (Becker & Neuhaus 2016, p. 31). They can be used permanently and the higher structure increases the greening potential and thus also the climate effect. Special structures enable the absorption and storage of water in a chamber system with comparatively low substrate thickness (ibid.). Intensive green roofs are rather elaborate green roofs with perennials, shrubs, lawns and possibly also trees. Here, there are no limits to the choice of plants when designed with a substrate filling of the appropriate height. Trees, for example, require a substrate height of at least 80 cm. The static load of over 3.0 kN/m² is statically relevant, so the data must be taken into account in the planning (Phoser et al. 2013, p. 62-71).

There are different ways to use intensive green roofs. They can be designed to be deciduous, evergreen or wintergreen and can be used on roofs with a roof pitch of 0 to 5 degrees. A combination with terrace areas, seating and walking areas or, for example, play areas and water basins is possible. They must be intensively maintained, which includes in particular a regular supply of water and nutrients and also the possibility of emergency irrigation during dry periods, ideally with rainwater. This means that the maintenance and care requirements are higher than for extensive planting. However, this depends on the plant selection of the intensive greening (Pfoser et al. 2013, p. 67). Alternatives to intensive greening with substrate fill are applications with planters and modular systems. The potential of greening with planters lies in their flexible handling as well as their changeability and expandability. This application can be used on all statically sufficiently dimensioned level surfaces with storm resistance. Due to the quick set-up, it is particularly suitable for temporary greening such as interim solutions with pre-cultivated planters, does not require a green roof structure and offers a large plant selection through the flexible insertion of non-hardy plants that have to overwinter in suitable spaces (Pfoser et al. 2013, p. 68). Compared to other intensive green roof systems, modular systems are also suitable for sloping surfaces up to 20 degrees. In addition, the substrate cannot be blown away by wind (Pfoser et al. 2013, 69). Furthermore, a distinction is made between simple intensive greening (Baumüller 2018, p. 112). This is a cost-effective special form in which the plants are arranged in such a way that they only require additional watering and care when necessary. The construction height is somewhat higher than for extensive green roofs, usually between 15 and 25 cm, and the construction weight is between 1.5 and 3.0 kN/m² (Pfoser et al. 2013, pp. 62-71).

On the grounds of the Ufa factory, 4000 m² of roof area are extensively planted with around 100 different plant species (Becker, Neuhaus 2016, p. 32; Internationales Kultur Centrum ufaFabrik e.V. o.J.a). Insects and birds benefit from this diversity. Initial irrigation promoted the growth of the sensitive plants. In the meantime, the vegetation has adapted to a lower water supply; only some roofs are occasionally irrigated with collected rainwater (Internationales Kultur Centrum ufaFabrik e.V. o.J. b). The green roofs of the ufaFabrik were scientifically monitored. About 75 % of the rain collected by the roofs evaporates again, with positive effects on the microclimate. In addition, the green roofs absorb up to 2000 kg of dust per year (Internationales Kultur Centrum ufaFabrik e.V. o.J. a). A non-toxic film made of recyclable polyolefin was used for sealing. The substrate above consists of expanded clay, expanded shale and soil. This combination is lighter than normal waterlogged soil and can absorb more water. At the same time, the substrate and vegetation increase the durability of the roof and protect it from weathering.

The tenants of Kalkbreite have access to a 2500 m2 courtyard that is open to the public, is located above a tram hall and has been intensively landscaped. Here, trees and shrubs were planted, benches, a children’s playground as well as a water feature and sandbox were realised. In addition, there are further, more private, green open spaces with several roof gardens on the roofs of the perimeter blocks on different levels, which are cultivated by the residents (Genossenschaft Kalkbreite o.J.).

Green roofs, as new green and open spaces, provide a higher quality of life and promote the psychological well-being of residents. They also have a positive effect on biodiversity, as they provide habitats for animal and plant species (Becker, Neuhaus 2016, p. 32). Green roofs generate positive microclimatic effects through a high rain retention potential and the reduction of surface and air temperatures.  With a 40 cm high green roof structure, there is already a difference of 5 °C between the air temperature on a green roof compared to a gravelled roof. This effect is stronger with higher vegetation and larger leaf areas – and thus also an advantage of intensive green roofs over extensive green roofs. So-called blue-green roofs are a combination of greening and water storage and are particularly suitable with regard to climate adaptation. The water is stored over a longer period of time and is released for cooling in dry periods through the evapotranspiration of the roof vegetation (Becker, Neuhaus 2016, p. 23).

Extensive green roofs are transferable to most existing roofs. Intensive green roofs are more costly, but usually provide aesthetically pleasing private and communally usable open spaces. In addition, due to the higher structure and plant heights, they have a stronger influence on the urban climate as well as the energy balance than extensive green roofs. On the other hand, this can also be combined with photovoltaics. This combination uses synergy effects between climate protection and adaptation. Some plants grow better under the solar modules due to shading and the higher humidity, while they perform better due to the lower temperature caused by the green roof and, if necessary, additional irrigation. There can also be a higher diversity of species under solar modules (Magistrat Linz 2020, p. 2). For the influence on the urban climate, the total proportion of green roof areas at district level plays a decisive role. Parameters for the strength of the temperature reduction are the density and height of the development and the proportion of green roofs. While the climatic influence of isolated green roofs is primarily limited to the roof level, the entire urban climate can be influenced by a larger network of green roofs.